Kalsang Gyatso was born in Lithang of Eastern Tibet. At the time of his birth, the Dalai Lama’s throne in Lhasa was occupied by Ngawang Yeshi Gyatso, installed by Lha-bzang Khan as “the real 6th Dalai Lama” in place of Tseyang Gyatso, the 6th Dalai Lama he had deposed a decade earlier. Though not considered legitimate by most Tibetans, Ngawang Yeshi Gyatso still held to this position thanks to Mongol support. In view of the conflict Kalsang Gyatso’s recognition as the 7th Dalai Lama posed in relation to the Mongol ruler Lha-bzang Khan, and to avoid any threat to his safety, the child was quietly taken into Lithang monastery for protection and training. In 1715, the Kangxi Emperor sponsored Kalsang Gyatso’s entrance into Kumbum Monastery, marked by formal ceremonies due to a Dalai Lama. This constituted an endorsement from the part of the Ching emperor as well as a public challenge to Lha-bzang Khan’s Dalai Lama.

The Dzungar Mongols invaded Tibet in 1717, invited by the supporters of Kalsang Gyatso. They deposed Ngawang Yeshey Gyatso, a widely approved move, and executed their rival Lha-bzang Khan. Though their coming was initially welcomed by the Lhasa population, their rampage of the city, marked by widespread looting, raping and killing soon lost them the good will the Tibetans had welcomed them with.

While still a boy, Kalsang Gyatso displayed high intelligence and profound wisdom and became famous for his ability to spontaneously compose verse. Inspired by a vision of the Je Tsongkhapa, founder of the Gelukpa order, a young Kalsang Gyatso, travelled to central Tibet where he gave a sermon before thousands of people.

Military conflict continued, with a second and larger expedition sent by the Kangxi Emperor, in league with Tibetan forces under Polhaney of Tsang and Gangchenney the governor of Western Tibet. Together, they succeeded in expelling the Dzungars from Tibet in 1720. They brought Kalsang Gyatso from Kumbum to Lhasa where he was enthroned as the seventh Dalai Lama in the Potala in 1721. He took his novice vows as well as his Bhikshu vows, receiving full ordination from the 5th Panchen Lama Lobsang Yeshi, who bestowed on him the name Kalsang Gyatso.

Kalsang Gyatso’s teachers were the Abbot of Gyumey Monastery, tutor to the 5th Panchen Lama Lobsang Yeshi, and Ngawang Yonten, the Abbot of Shalu Monastery. He studied all the major Buddhist philosophical treatises and became a master in both sutra and tantra. In time, Kalsang Gyatso became a great scholar and accomplished composer of many works, especially on tantra. He was also a noted poet who, unlike the 6th Dalai Lama, Tseyang Gyatso, dwelt mainly on spiritual themes.

The Kangxi Emperor declared Tibet a protectorate of the Qing Empire and in 1727 installed two high commissioners, or Ambans, and a garrison of Qing troops from China in Lhasa. Polhaney of Tsang, ruled Tibet with Qing support from 1728–1747. 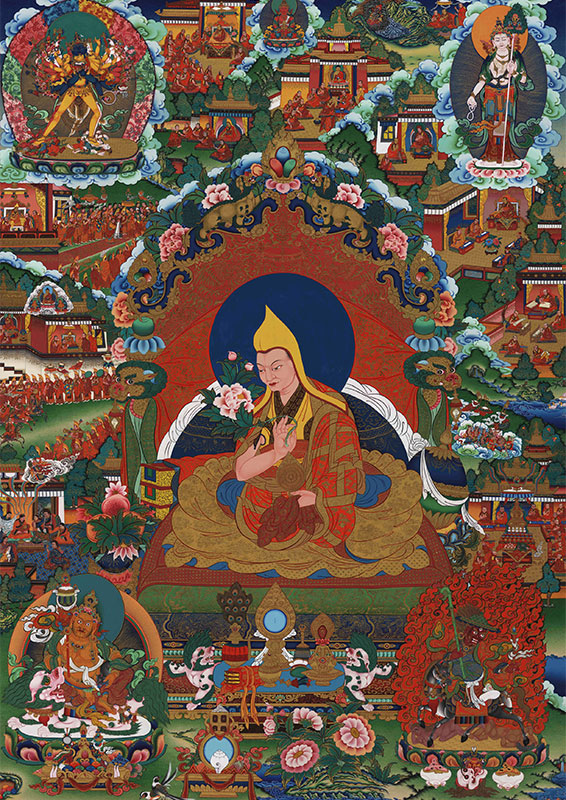